A clinging jellyfish caught by a member of the public in Point Judith Pond in June 2020. (DEM photos)

CHARLESTOWN, R.I. — Recent warnings about the presence of clinging jellyfish in some coastal ponds have caused a stir, because the tiny organisms sting, and they are difficult to spot.

People who use the coastal ponds should be aware of the possibility they might encounter clinging jellyfish, or gonionemus vertens.

Katie Rodrigue, principal marine biologist with the Rhode Island Department of Environmental Management’s Division of Marine Fisheries, has been monitoring clinging jellyfish, because while their sting is an unpleasant nuisance for most people, others may experience serious allergic reactions.

“The reason it’s a cause for concern is because, for some individuals, it can cause a severe sting,” she said. “In 2019, I believe it was, we had a couple of people end up in South County Hospital after being stung, because they had a pretty severe reaction to it.”

Clinging jellyfish have two life stages — a polyp and a medusa, which is produced by the polyp. The polyps, which are only about half a millimeter in size, are found in Rhode Island throughout the year and produce medusae in mid- to late summer. A single polyp will produce multiple medusae, and it is during this medusa stage that the organisms develop tentacles, and become jellyfish that sting.

“There’s two life stages of it, and the medusa stage is what we would recognize as the jellyfish — the bell with the tentacles,” Rodrigue said.

The clinging jellyfish is an invasive species that was first recorded on Cape Cod and in Groton, Conn., in the late 1800s. That population, which originated in the Eastern Pacific, declined as eelgrass beds died.

In the 1990s, clinging jellyfish began to make a comeback and are associated with a North Pacific species that produces more toxic stings.

How did this species get all the way to New England? Rodrigue said it could have made the trip as a polyp.

“Because that polyp stage can latch onto hard surfaces, it could have latched onto a ship’s hull,” she said. “I think one theory I read about was bringing oysters in. That could have brought in some of those polyps.”

What distinguishes clinging jellyfish is a reddish-brown “x” mark on the bell, but that marking doesn’t mean they are easy to detect.

“They’re really tough to see, especially during the day, and they get their name ‘clinging jellyfish’ because they like to hold on to eelgrass and other submerged vegetation,” Rodrigue said. “They sort of hide during the day and hang on, but if they get disturbed, say, if somebody’s walking through an eelgrass bed or something, they would release off of it and swim into the water column, and that’s when somebody would be able to encounter them.”

“At night is when they’ll release themselves off of the eelgrass and then they’re in the water column, feeding on zooplankton,” Rodrigue said. “And so, they’ll be a little bit more mobile at night.”

So far this summer, clinging jellyfish have been recorded in Potter Pond in South Kingstown and parts of Ninigret Pond. In previous years, they have been documented in Point Judith Pond and the Narrow River. It’s important to keep in mind, however, that they could be living in other waterbodies and just haven’t been spotted yet.

Clinging jellyfish are not the only species that people should be watching for. Salt Ponds Coalition president Arthur Ganz, a retired marine biologist, said he had not been notified of any encounters with clinging jellyfish this summer and described the stinging sea nettle jellyfish as being far more numerous.

“Sea nettles are very abundant in the ponds, more so, I’m going to say, over the last 20 years,” Ganz said. “Their numbers have very much increased. We’d see them occasionally in the real hot summer, but now, they’re everywhere. I was out on my boat and I just looked down at my mooring and there was probably 20 within a square meter. So, they are the ones that are the biggest nuisance.”

“They don’t have obvious tentacles and they don’t bother people,” Ganz said. “It’s essentially the sea nettles that are the biggest problem.”

On the ocean side, beachgoers should steer clear of the cyanea, or lion’s mane jellyfish, which can grow to be very large and is armed with long, stinging tentacles.

“They’ll give you a nasty sting, and what happens with the cyanea is, on the ocean side, they’ll break up in the surf, so the tentacles are floating free, so even though you don’t have one right there in your vision, you could get nailed by the broken-up tentacles,” Rodrigue said.

She suggests people who plan to spend time in the calmer areas of the salt ponds, especially near eelgrass beds, wear protective clothing.

“If you’re going to be in one of these coastal pond environments, an area that’s very calm and protected and has a lot of submerged vegetation, I suggest just covering up,” she said. “If there’s a barrier between the jellyfish and your skin, that’s going to be the best bet to avoid getting stung; waders, wet suit, even leggings will all help with that.”

People who are stung should apply plain, white vinegar to the affected area.

“What that’ll do is at least prevent any more stinging cells from firing,” Rodrigue said, adding that the old remedy of pouring urine on a sting is definitely not recommended.

“Do not do that,” she said. “If anything, that can actually make it worse. That, or using fresh water. A lot of people, because of the irritation, they might want to dump some cool, fresh water on it, but that’ll actually cause more stinging cells to fire on your skin.”

DEM asks people who encounter clinging jellyfish to contact the agency at 401-423-1923 or by email at DEM.MarineFisheries@dem.ri.gov. Reports can also be posted on Facebook or Instagram. 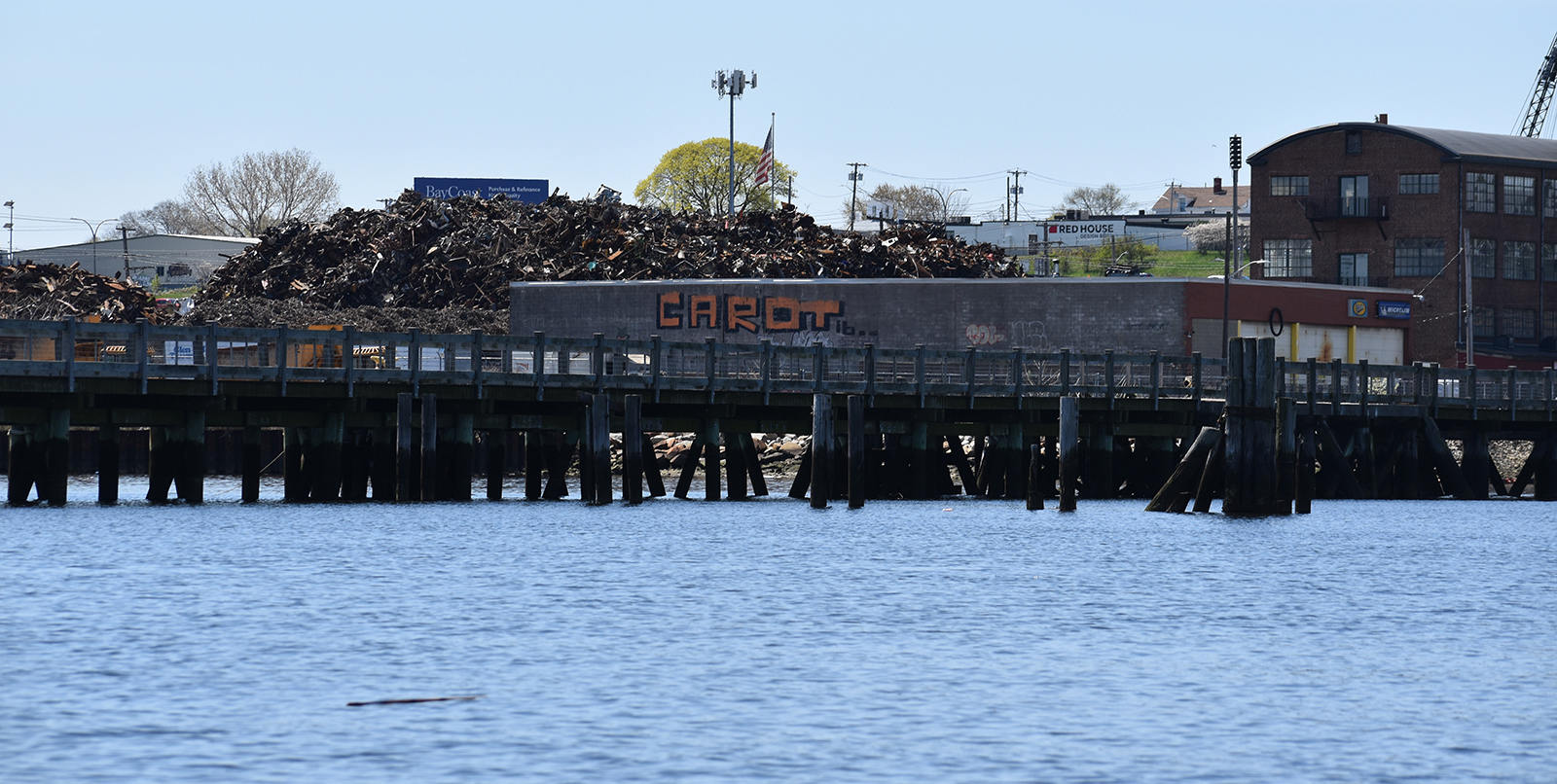 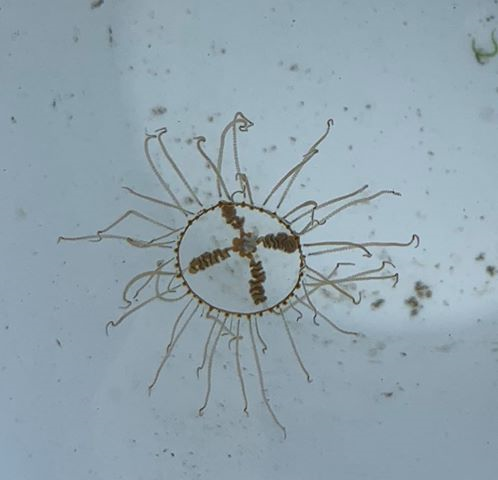