A climate vulnerability assessment was conducted on the Fields Point Wastewater Treatment Facility on the banks of the Providence River to address such issues as rising waters and storm surge. (Brian P. D. Hannon/ecoRI News photos)

PROVIDENCE — The wastewater operation in Rhode Island’s capital is based on the 19th-century sewers of Paris, but has evolved from a detour into the river to a system able to recycle millions of gallons daily with the aid of gravity, three wind turbines and microbial employees consuming the organic material people are happy to flush and forget.

The development of the Fields Point Wastewater Treatment Facility, including system upgrades and the incorporation of renewable energy, is rooted in an appreciation for the basic reliance residents have on natural resources, according to Narragansett Bay Commission (NBC) public affairs manager Jamie Samons. The NBC owns and operates the facility.

“We think of ourselves as an environmental organization,” she said. “We take dirty water and we make it clean.”

The history of the NBC springs from Fields Point, the third-oldest sewage treatment facility in the country. The commission also owns and operates the Bucklin Point Wastewater Treatment Facility on the East Providence shoreline.

The Ocean State’s 19 major wastewater treatment facilities, with 240 pumping stations and hundreds of miles of sewer lines ranging from a few inches to 9 feet in diameter, treat 120 million gallons of waste daily. Most of them are in low-lying areas, anchored downhill around Narragansett Bay and the rivers feeding it. They use gravity to help lessen pumping and electricity costs.

The historic floods of March 2010 revealed weaknesses in the state’s wastewater infrastructure when it comes to the challenges presented by the climate crisis.

Fields Point, besides being the state’s largest wastewater treatment facility, is also located in upper Narragansett Bay, along the banks of the Providence River off Save the Bay Drive. Sea-level rise, storm surge and more frequent and severe weather increasingly put the plant at risk.

A 2017 study, “Implications of Climate Change for Rhode Island Wastewater Collection & Treatment Infrastructure,” determined Fields Point is one of seven wastewater treatment facilities that would be largely inundated during a 100-year storm and among the 10 plants most at risk from the climate crisis.

To protect surrounding neighborhoods from a breach at the facility, Fields Point conducted a climate vulnerability assessment, instituted a resiliency plan and incorporated mitigation strategies into upgrades. Future changes could include new water-tight doors and berms around tanks. There’s no easy or inexpensive solution to immediately eliminate threats posed to the shoreline facility by the climate crisis.

“None of us have a crystal ball and all of us have limits,” said Bill Patenaude, principal engineer for the Rhode Island Department of Environmental Management’s Office of Water Resources.

The relocation of Fields Point — or any other wastewater treatment facility in Rhode Island — isn’t currently planned, but could become an idea for consideration when a facility reaches its design life, according to Patenaude.

While relocating may eventually be more cost-effective than rebuilding in an existing spot, Patenaude said municipalities and plant operators each have their own “menu of options” that best address their situation.

Patenaude and Samons said climate-change planning is essential for wastewater operations. Those plans can include equipment upgrades and replacement, staff training and pre- and post-storm analysis of factors from the technical to the basic, such as whether employees can reach a facility during severe weather.

“It’s a part of our strategic plan, it’s a part of our capital plan. It is built into all capital and operating decisions that we make,” she said. “We deal with the effects of climate change every day. We see bigger storms, more intense storms, so it’s absolutely critical for us to consider these things.”

European style
In the mid-1800s, the population of Providence wasn’t significantly smaller than its current count of about 180,000. But the city at that time also was home to more than 300,000 horses, which were not particular about using designated areas to complete the food digestion process. The resulting waste was often swept through streets and into homes by rain. It helped spread an outbreak of cholera, prompting city officials to eventually build a sewer system to take wastewater off the streets.

The city turned to Europe for ideas. Providence’s head engineer traveled across the Atlantic and found a model for the Ocean State in the sewers under Paris. Constructed in 1901 and owned by the city of Providence until 1980, Fields Points served its purpose of redirecting wastewater for decades.

“It was a great engineering solution in 1872, but it became illegal in 1972,” Samons said. “When it rains a lot, those sewers get overwhelmed and then you have to provide a relief point, and the relief point is out to the river.”

The operation fell into such disrepair that the General Assembly created the NBC to take over in 1982. The original chemical house is listed on the National Register of Historic Places and the building remains part of the operation, but the campus along the river was largely revamped, and by 1995 Fields Point was named the best wastewater facility in the nation. The administration building now has a green roof and a graywater system.

Fields Point, with a capacity of up to 77 million gallons per day for full, advanced treatment, has a combined system enabling treatment of sewage from homes and businesses and stormwater runoff during heavy rains. The operation is one of only three combined systems in the state, along with Pawtucket and Central Falls. Fields Point treats 40-50 million gallons of wastewater on an average, dry day. In wet weather, the facility can handle up to 200 million gallons daily, although at the elevated flow rate not all of the water receives full treatment.

Stormwater runoff carries an array of debris, from commuter trash to sporting and seasonal items.

“We’ll get things like sticks and stones and Dunkin’ Donuts cups and soccer balls,” said Samons, explaining the water passes through the plant’s first stage of “bar screens” resembling window security, which catch large things such as Venetian blinds and decorated Christmas trees. “Those are obviously things someone just shoved down a manhole.”

In the next treatment phase, the water moves 1-2 feet per second into large, outdoor tanks and is left to sit for about a half-hour. The system removes primarily inorganic debris such as sand and asphalt before traveling to a larger tank where organic material — the kind you flush — separates from oil and grease and can be removed.

Despite the open-air location, even those vaccinated from the coronavirus may find themselves reaching for their masks to filter the biological bouquet emanating from these tanks.

Small bits of excrement without enough density to sink are put through a biological process using single-cell bacteria, known among staff as “bugs,” which combine with air injected by bubble diffusers similar to those in fish tanks or hot tubs.

“These bugs, the sole reason that they live is to eat poop,” Samons said. “We know these guys are useful workers. They are our most valued employees. So we recycle them and use them again.”

Another set of bugs then removes nitrogen. The element is problematic for waterbodies like Narragansett Bay because the nitrogen can fertilize algae, which decomposes and robs oxygen needed by marine life. The facility’s integrated fixed film activated sludge process went online in 2014 and has reduced nitrogen input by more than 85 percent while preventing additional land use in the “really constricted footprint” of Providence, Samons said.

“Normally when you remove nitrogen you have to build additional tanks, and we don’t have room,” she said. “With this technology we were able to keep it in our existing tanks. It’s just been a really elegant solution for us.”

After the bugs compete their work, the water may still contain small amounts of pathogenic bacteria that are disinfected with sodium hypochlorite, better known as bleach. Pumping bleach into Narragansett Bay is illegal under the federal Clean Water Act, requiring the facility to use sodium bisulfite to neutralize the chlorine before unrecycled water is expelled to the Providence River.

“It takes about 12 hours from start to finish,” Samons said of the process, which the facility conducts around the clock every day of the year.

The capacity for stormwater capture is increased by a 3-mile-long tunnel running 250 feet below Providence, which holds excess water until the overflow recedes and can be treated at Fields Point.

“On an average we’re getting about a billion extra gallons of water a year here at this facility,” Samons said. “Since 2008 when it went online we’ve captured about 12 and a half, 13 billion gallons that then comes here and gets full treatment.” 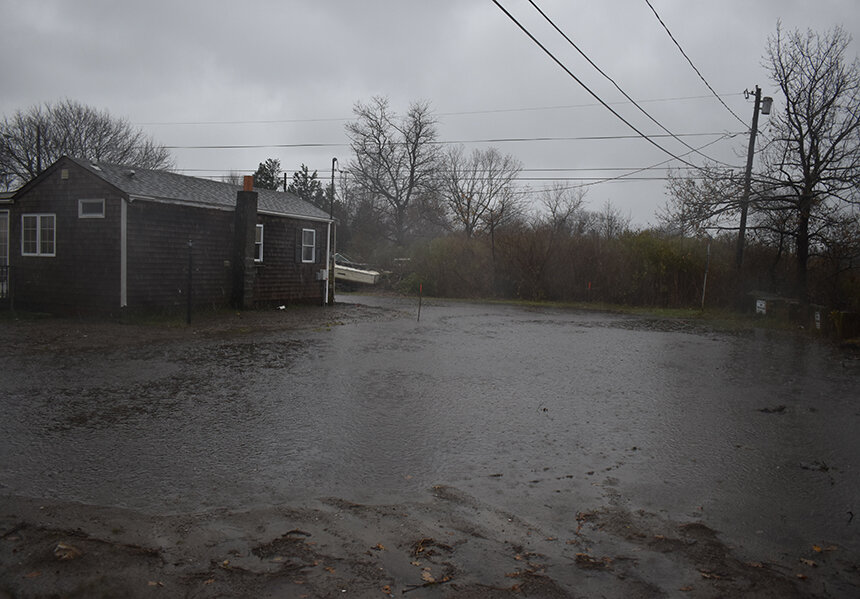 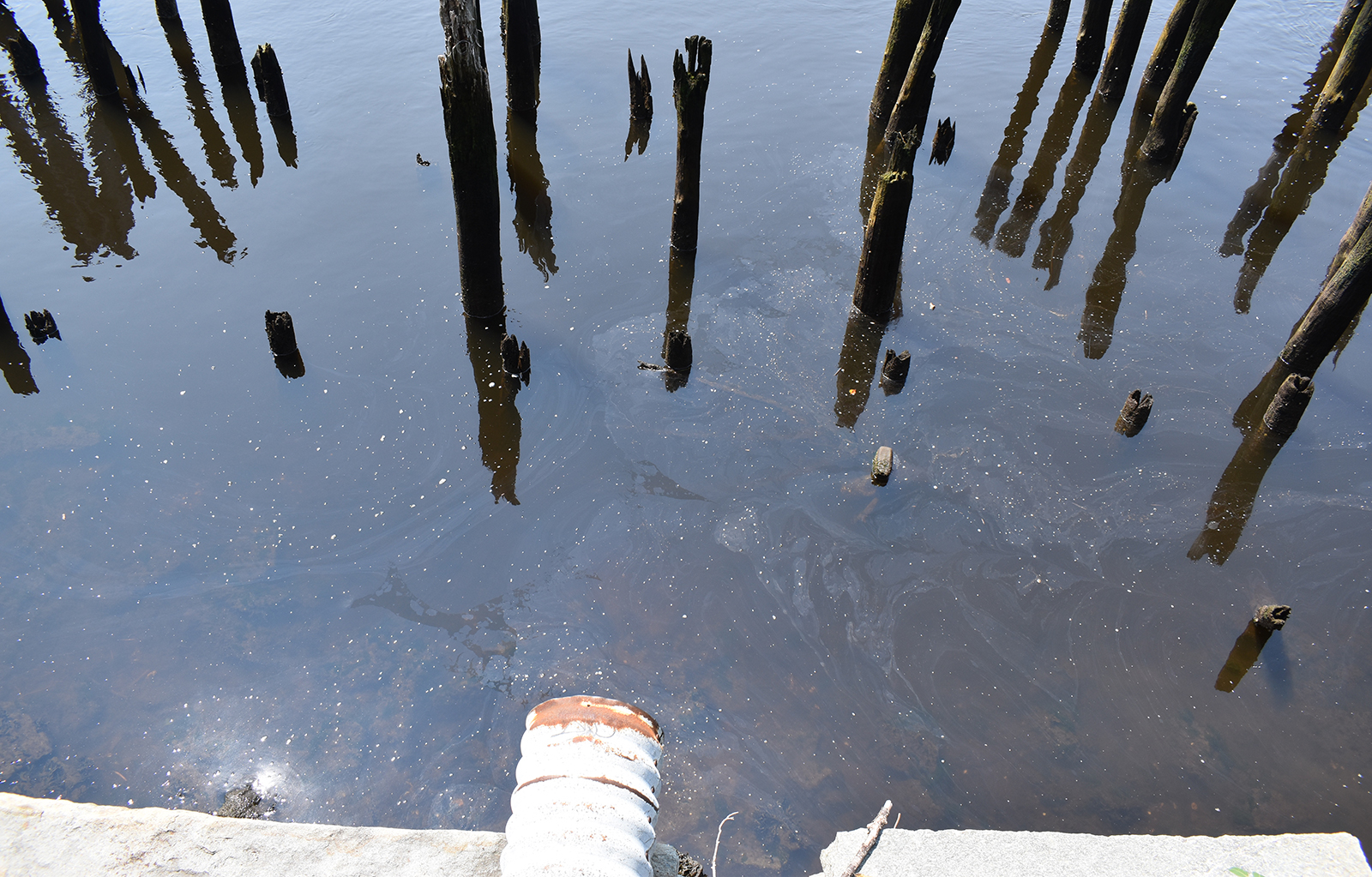 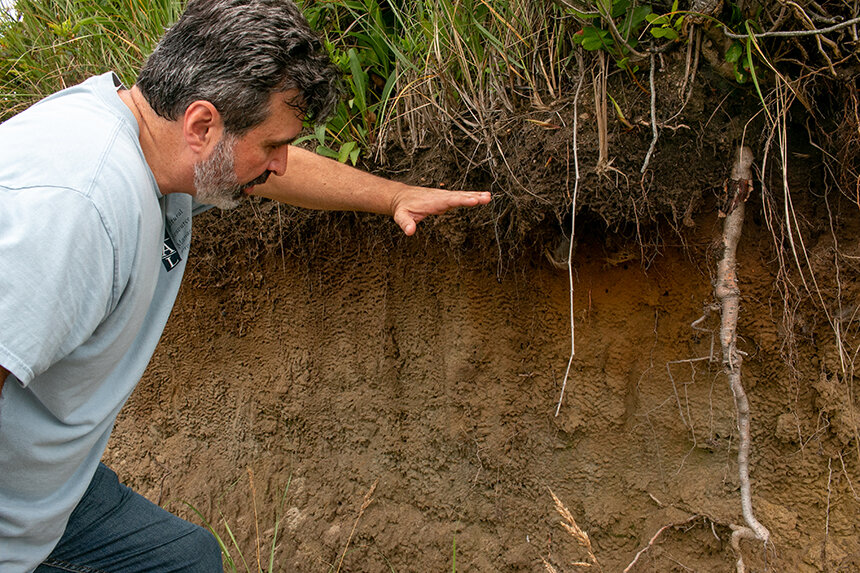 Climate Crisis When the Sea Comes to Claim the Past: Climate Change and Coastal Archaeology