During beach season, Rhode Island makes money filling parking lots with cars, like the one at Easton’s Beach in Newport, shown here on May 23. Better public transportation to the shore would lessen traffic congestion and reduce climate emissions. (Joanna Detz/ecoRI News)

CHARLESTOWN, R.I. — Rochelle Lee first set foot on a saltwater beach three decades ago when she moved from Indiana to Providence and began enjoying all the Ocean State has to offer. She was able to do that because she could afford to own a car, although she would have preferred to take the bus.

Unfortunately, then as now, bus service to Rhode Island’s beaches is minimal and nearly nonexistent in the off-season. Public transit isn’t really an option, Lee said.

“If you don’t have a car or you’re working multiple jobs, how do you get your family to the coast?” Lee asked. “We need equity and access. Climate change has made that conversation easier. It’s highlighted the privilege associated with beach access.”

The ongoing privatization of the coast is built upon decades of regulations that restricted Black and Brown people from using public beaches. Equal access to the coast remains a societal problem.

Throughout much of the 20th century, as a 2018 story in The Guardian highlighted, local governments across the United States enacted policies and practices designed to exclude people of color from public beaches.

“In the south, those methods were quite explicit,” the story noted. “Coastal cities such as Norfolk, Virginia, Charleston, South Carolina, and Miami, Florida, prohibited African Americans from stepping foot on any of their public beaches, and for years ignored blacks’ demands for public beaches of their own.”

When White officials did respond to Black people’s demands for beaches of their own, The Guardian reported, they “invariably selected remote, polluted, often hazardous, locations.”

In Washington D.C., for example, officials designated Buzzard’s Point, a former dumping ground downstream from a sewage plant, as an appropriate location for the city’s “colored” bathing beach. In New Orleans, it was a remote site on Lake Pontchartrain, 14 miles from downtown, surrounded on both sides by fishing camps that dumped raw sewage into the lake.

In the Northeast, White people employed subtle but effective methods of segregation. Predominantly White communities, for instance, designated their public beaches for residents only, charged exorbitant access fees for non-residents, and/or barred non-residents from parking near the shore — all designed to keep minority populations in neighboring cities out.

Today, remnants of this practice remain in Rhode Island. Bus service to the beach continues to be limited, is often molasses slow — for instance, a bus trip from Woonsocket to Scarborough State Beach in Narragansett, a 50-mile trek, can take up to two and a half hours one way — and inconsistent.

A Rhode Island Department of Environmental Management (DEM) press release promoting the upcoming summer beach season makes no mention of how to get to the beach if you don’t have access to a car.

Last year’s DEM press release touting the opening of beach season — it and public transit were impacted by the coronavirus pandemic — made no mention of how to get to the Ocean State’s seven state beaches via bus. A similar DEM press release advertising a pre-pandemic 2018 beach season also made no reference to bus service to the Rhode Island shore. It did encourage beachgoers to buy seasonal passes to help ease weekend traffic tie-ups. Encouraging people to take public transportation would also help lessen traffic congestion.

The reason the state avoids making a case for public transit is simple: making money by packing parking lots with vehicles is more important than sharing the Ocean State’s signature attraction with those who can’t afford to own a car — even if supporting the use of public transportation benefits the environment and helps mitigate the climate crisis.

The group noted that the cleaner air, ocean waters and recreation that beaches offer are a public good, especially during a stress-inducing pandemic, and that low-income communities deserve the opportunity to access these places.

“Apparently state decision-makers realized that it’s important to open the beaches to give people relief, but still were willing to shut down the Beach Buses that have traditionally allowed low-income people a share of that relief,” according to a June 2020 RI Transit Riders statement. “This inequality must be rectified.”

In a recent press release, RIPTA touts its service options to multiple beaches, including the return of the Beach Bus program, which will operate weekends and holidays from June 19 to Aug. 22 for the communities of Central Falls, Cranston, North Providence, Pawtucket, Providence and Woonsocket.

In addition to the five other bus routes that offer access to the shore, RIPTA, “[a]fter listening to community concerns about access to local beaches,” is offering a free beach shuttle — the initiative may be funded by a grant from a church group — that will connect neighborhoods, such as Miantonomi Park, in Newport’s North End to Easton’s Beach and to Sachuest Beach, also known as Second Beach, in Middletown.

This pilot program will expand beach access in an area where as many as 19 percent of residents don’t own cars and many can’t easily enjoy a day at the beach, according to RIPTA.

The planned service has received criticism from the Middletown Town Council, with several members raising concerns that Newport residents could visit the beach for free — there is no fee to walk onto Middletown public beaches or if you are dropped off by bus, taxi or parent — while local residents must continue paying to park.

“We are charging our residents,” Middletown Town Council President Paul Rodrigues said during an April 29 meeting. “And worst-case scenario, [they] see a busload of people unloading and taking up space on the beach that they are not paying for. With me personally, it just doesn’t sit right.”

Fellow council member Theresa Santos also doesn’t seem to like the idea of sharing a coastal resource unless one pays to park there, saying, “As far as busing nonresidents down to Second Beach, our residents pay to get on the beach. Why should RIPTA pick up passengers … and leave them off without paying?”

For the record, the bus doesn’t park there. In Newport, about 17 percent of the population is Black, Indigenous, Hispanic or Latino. In Middletown, the percentage drops to about 7 percent.

Lee, a 70-year-old Black woman, and others, such as Pawtucket resident Cristina Cabrera, a member of the Pocasset Wampanoag Tribe of the Pokanoket Nation, and Bella Noka, a Narragansett Indian Tribe member, believe making the coastline more accessible to everyone needs to be a state priority. But, they noted, it’s difficult to have faith in a system that has long showed it doesn’t work for people of color.

“It needs to be fair and equitable,” Lee said. “Privatizing beaches and access is unacceptable. Who has access and who doesn’t matters.”

Noka noted that children, many of whom are Black and Brown, are being kept from the sea, or at least not being given an equal opportunity to enjoy what the coast has to offer.

“Privatization is often viewed to provide positive stimulus for the economy that can lead to the betterment of society,” according to the paper. “But when the appropriate governance systems are not functionally in place, the unwanted effects of privatization can have deleterious consequences.”

While the paper focuses on developing countries such as the Philippines, its points are intimately relatable to the history of southern New England. The paper noted that “poorly planned coastal tourism and housing development projects in the foreshore areas, inappropriate reclamation of coastal areas, illegal usurpation of indigenous people’s rights over ancestral domain areas” exacerbated the degradation of the shoreline.

The Narragansett Indian Tribe, for instance, long inhabited the area along Narragansett Bay from present-day Warwick to South Kingstown. Today, the Narragansetts, which were the largest of a number of Indigenous tribes living in southern New England, own no coastal property.

Standing a few feet from the Charlestown Breachway, on a beach where Indigenous people once danced and prayed without being hassled, Cabrera noted its profound beauty. She said the privatization and overpolicing of the shore and sea is “shocking” and “difficult to understand.”

“I come back here for the salty air, breezes, and the horizon,” she said. “It’s an incredible feeling, and no one should be denied this access.” 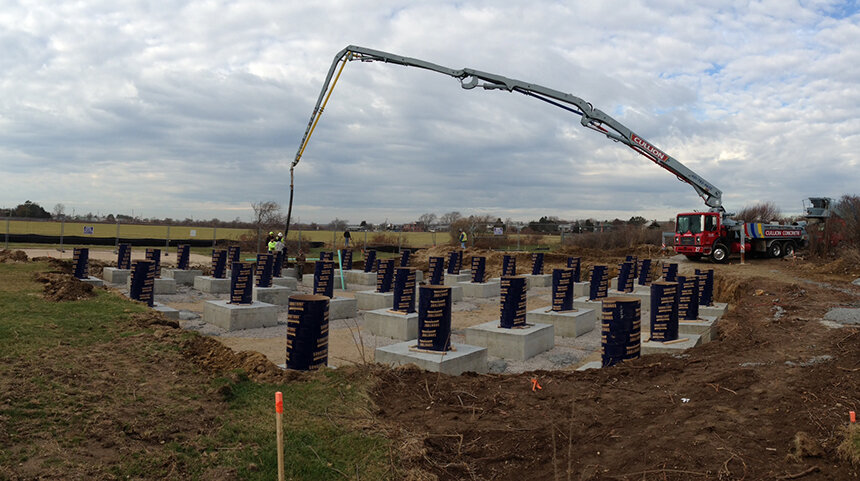 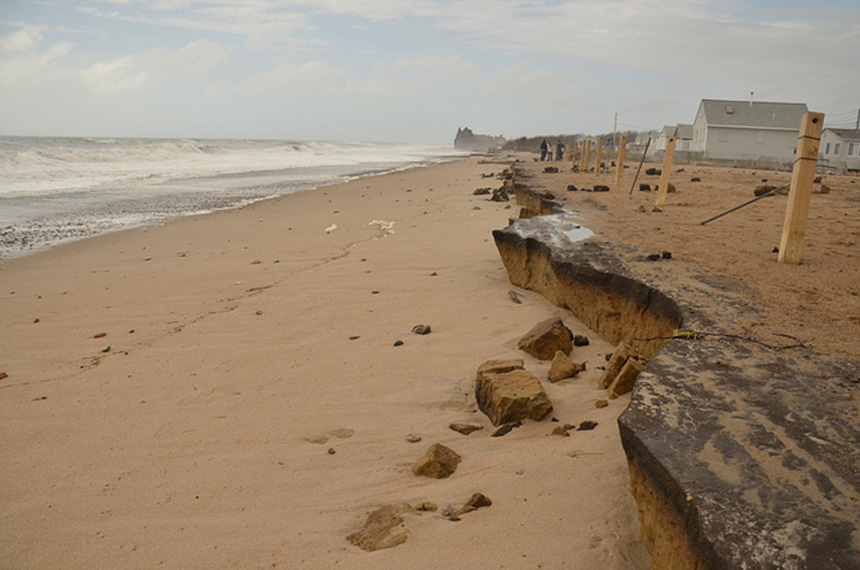 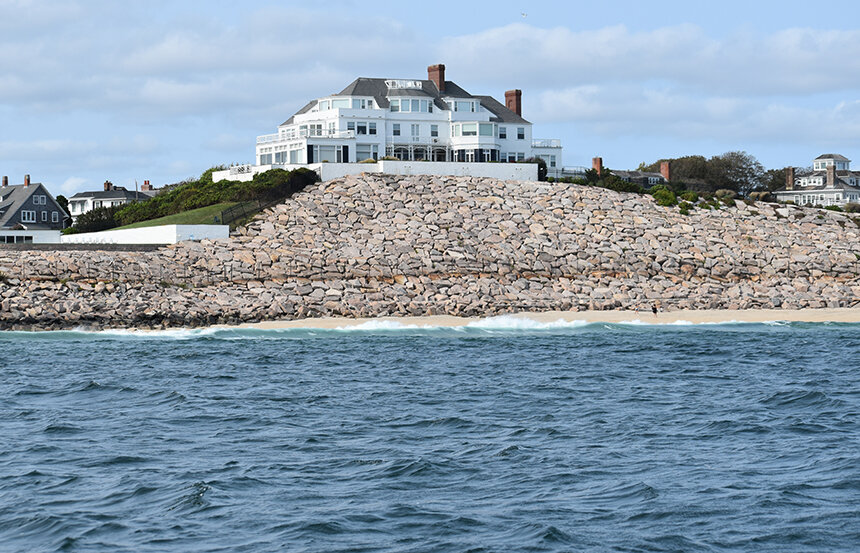