Scallop dredges attached together on a beam at a fishing dock in the Netherlands. (Jeremy Collie)

A worldwide study on the impacts of bottom trawling, which accounts for a quarter of the world’s seafood harvest and can negatively impact marine ecosystems, has found that seabeds are in good health where trawl fisheries are sustainably managed.

The research published in Proceedings of the National Academy of Science by a team including co-author Jeremy Collie, professor of oceanography at the University of Rhode Island, builds on recent international collaboration in this field and is the first worldwide study of its kind. It brings together data from 24 large marine regions around the world to establish a relationship between distribution and intensity of trawling activities and the biological state of seabeds.

Researchers, led by CSIRO, Australia’s national science agency, assessed the status of seabed biota, or marine organisms, on a scale from 1 (unimpacted) to 0 (fully impacted) and found that 15 regions studied had a status greater than 0.9, while three had a status less than 0.7, and 1.5 percent of all seabed areas studied had a depleted status of 0.

“The results show that effectively managed and sustainable trawl fisheries are associated with regions having high seabed status of 0.95 or more,” Pitcher said. “Regions that had low seabed status scores were places where fish stocks typically are over-exploited and have ineffective management regimes.

“Detailed data were not available for all jurisdictions where bottom trawling occurs, but importantly, this study provides the world’s first statistics to estimate the impact of global trawling and provides an evidence base to inform effective improvements to trawling practices worldwide.”

Data from the Northwest Atlantic — the coastal and offshore waters extending from the Carolinas to Greenland — were not available for this study but the results are relevant to the region, where bottom trawls and dredges account for much of the fisheries catch.

In U.S. waters the Sustainable Fisheries Act of 1996 mandated the protection and restoration of essential fish habitat. The New England Fisheries Management Council uses the Fishing Effects Model to calculate the percentage of seafloor habitat that is disturbed by bottom fishing.

“These trends indicate that maintaining fishing effort at sustainable levels has the added benefit of reducing impact to the seabed animal life that sustains fisheries production.”

“By bringing these data together from across 24 large marine regions of the world we are able to establish foundational statistical relationships between trawling activities, their impacts and ecosystem status, including implications of trawl-gear choices and spatial distributions of trawl intensity,” Hilborn said.

Commercial fishing gear that is dragged along the seafloor to capture species that live on, in or near the ocean bottom has long been criticized for damaging sensitive habitats and catching innumerable non-target species. It disturbs sediments, destroys corals, and removes many of the organisms that commercial species feed upon.

Collie has said trawling is controversial because it can affect entire ecosystems.

“It’s a serious problem, but we’re finding that it’s a very localized problem,” he told ecoRI News in 2017. “The distribution of where bottom fishing takes place is patchy, and the habitat we care about is patchy. Where those two things intersect is where the problem is.” 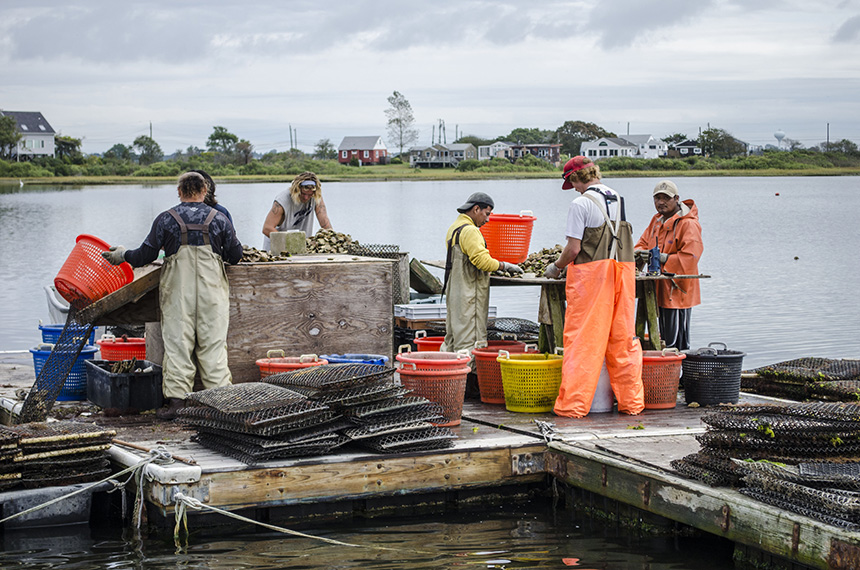 Aquaculture & Fisheries Some See Shellfish Farms as Beneficial; Others See an Eyesore