The rocky bones of the 18-acre island in lower Narragansett Bay are expected to keep it insulated from the waters rising around it. (Frank Carini/ecoRI News photos)

NEWPORT, R.I. — About a mile from the hustle and bustle of tourists parading up and down Thames Street is a quiet oasis fairly well fortified, at least when compared to much of the Ocean State’s coast, from the climate crisis swirling about it.

While the City-by-the-Sea’s low-lying areas such as The Point and Wellington Avenue are already well familiar with nuisance flooding and its waterfront, the heart of a thriving tourist economy, projected to be inundated by 5 feet of sea-level rise, an 18-acre island in Newport Harbor has the natural bones to stand tall against Mother Nature roided up on greenhouse-gas emissions.

Rose Island’s history is filled with fight. The island has had a documented human presence since the mid-17th century, when it was used by the British, French and Colonial armies for early fortifications. The Army, in 1798, built Fort Hamilton on its rocky shores.

After the Civil War ended, the island in lower Narragansett Bay was designated as part of the Navy’s experimental torpedo station. During World War I and World War II, Rose Island became consumed with the building and storage of torpedoes and explosives, with up to 40 buildings containing military equipment.

By the end of the 1940s, the military abandoned the island, taking the guns, ammunition and explosives and leaving behind the buildings and their accompanying infrastructure to fall into disrepair.

Besides leaving behind a mess others would eventually have to clean up, the military, having basically cleared the entire island of native vegetation, also created a void that was filled with invasive plants, most notably multiflora rose, oriental bittersweet, honeysuckle and black swallowwort.

Seven decades later, native shrubs such as sumac, trees (black cherry) and plants (goldenrod and tansy) compete for existence within a landscape overrun by nonnative vegetation.

A beacon for change
During the boat ride from the Newport Shipyard to the dock at Rose Island a few days before the rain-soaked Memorial Day weekend, Starfish captain Brian Tefft, executive director of the Rose Island Lighthouse & Fort Hamilton Trust, spoke about the island’s extensive military history — one it shares with Goat and Gould islands.

While Rose Island is rich with military history, that aspect of the island is largely overshadowed by its famous lighthouse, easily visible to anyone who has driven across the Newport Bridge.

Built in 1869 — at the reported cost of $7,500 — on the southwest bastion of Fort Hamilton to warn ships entering Narragansett Bay, the Rose Island Lighthouse — and the rest of the island, for that matter — was saved by a tenacious group of concerned residents.

It took quite an effort to get to this point.

The landmark, including its valuable sixth-order Fresnel lens, was heavily vandalized after being abandoned as a working lighthouse in 1970.

During the next 14 years, several attempts were made to find a taker for the decommissioned lighthouse and its derelict surroundings. The General Services Administration considered the property surplus and first offered it to other federal agencies, then to the state of Rhode Island and finally the city of Newport. It was even offered to the University of Rhode Island. No one was interested in a vandalized lighthouse, crumbling brick and stone barracks and a ramshackle pier.

In 1984 a group of Newporters led by Charlotte Johnson, Betsy deLeiris and the late Curtis Bunting organized an effort to save the lighthouse from demolition and the island from development.

In September of the previous year, four local businessmen had obtained the big chunk of Rose Island for $27,500 with plans to build an 850-slip marina and condominiums. The federal government had retained ownership of the 16.5-acre parcel.

Under their development plan, the entire east side of the island and some 60 acres of Narragansett Bay, where eel grass beds grow, would have hosted the marina, the building of which would have required the dredging of about 150,000 cubic yards of the bay’s bottom. The dredged material was to be dumped on the island. It would have reportedly been the largest marina in Rhode Island, doubling Newport Harbor’s capacity for boats.

The resident group — which was originally called Citizens to Protect Rose Island before becoming the Rose Island Lighthouse Foundation — is credited with eventually convincing the city to take ownership of the lighthouse from the federal government. In early October 1985, the lighthouse and the one and a half acres surrounding it were deeded to the city at no cost.

The city then delegated management authority to the Rose Island Lighthouse Foundation, which made its mission to restore the lighthouse to its former glory and open it as a museum.

The effort took eight years, and on National Lighthouse Day, on Aug. 7, 1993, the $1.2 million restoration project was completed, and for the first time in more than 20 years the Rose Island Lighthouse was back in operation, beaming a beacon from the tower nearly 50 feet above Narragansett Bay. The lighthouse is now on the National Register of Historic Places.

The restoration effort was aided by the grandson of Rose Island’s longest tenured keeper, Charles S. Curtis, who manned the lighthouse from 1887 to 1918. Wanton Chase lived with Curtis and his wife, Christina, between 1913 and 1918.

After leaving Rose Island as a 10-year-old, Wanton continued to live in Newport. When the Rose Island Lighthouse Foundation established its first Aquidneck Island office in 1985 — it was in Johnson’s house — Chase visited one day looking for information about the restoration work and offering help.

The lighthouse was largely restored through the memories of a then-77-year-old with intimate knowledge of life on the island in the early 20th century.

While the Rose Island Lighthouse Foundation was raising the money to fund the vast restoration effort, its members were also successfully fighting the proposed marina. The sheer number of permits required aided in the massive project’s derailment.

Besides human visitors between April 1 and Nov. 1 and Tefft’s offseason visits, the island’s animal life is dominated by birds, common ones such as cardinals, catbirds and sparrows, two species of gulls (great black-backed and herring) and colony nesting wading birds. It’s the latter group that has featured black-crowned night herons, little blue herons, glossy ibis, and great, snowy and cattle egrets that saved the island from development, according to Johnson.

Their nesting is what interested DEM in providing funding to preserve the island.

Nesting of these species peaked during the late 1990s, and today glossy ibis and black-crowned night heron have begun to return and small numbers of herons and egrets can be seen foraging along the shoreline or roosting in mostly nonnative vegetation at night.

Tefft said the decline in nesting was predicted by experts who have theorized that the dynamics of populations of these birds often results in peaks in abundance followed by abandonment. Most of Rose Island is closed to humans from March 1 through Aug. 15 each year to protect bird habitat from being disturbed.

Rock solid
For Johnson and the others she worked with, the idea behind saving both the lighthouse and the island was to create a place where conservation, history and ecology could be studied and where the environment would be respected.

Educational programs for students were implemented. Island tours were started. A museum was opened. Gardens were planted.

“We wanted visitors to be aware of the island’s resources — collected rainwater, the food being grown, the renewable energy being generated — and the natural world around them and treat it with respect,” Johnson said.

Weekly lighthouse keepers paid for the privilege of working on the island. The rotating cast of keepers was eventually replaced by boarders who can now rent one of the island’s five rooms for overnight stays. Guests are ferried to and from the island by the Starfish, a 1985 former lobster picnic boat from Maine.

Birds and the occasional mink and deer that swim ashore from Jamestown and Prudence Island were given sanctuary. The latter two don’t stay long, as there is no freshwater source on the island.

For human visitors — of which there are about 5,000 annually; the Newport and Jamestown ferries drop of passengers for day visits — three cisterns, with a combined holding capacity of about 7,500 gallons, provide water for internal plumbing such as sinks, showers and toilets. While the collected water is filtered and chlorinated, it’s not for drinking. Top-loading water jugs quench thirst.

Drought plays havoc with the island’s water supply. During ecoRI News’ visit in late May, during a particularly dry spring, the largest cistern, 3,500 gallons, was down to 1,000 gallons.

The off-the-grid island is powered by a 48-volt solar system. There’s a backup diesel generator that is rarely needed. There’s no cable or internet. The tower that once supported a small wind turbine now hosts a weather station.

Tefft, who has been the executive director of the trust since 2017, brought with him three decades of experience from the Rhode Island Department of Environmental Management, most of it spent in the agency’s Division of Fish and Wildlife. He has used that experience to implement habitat restoration projects designed to knock back the invasive species that took over the island as it was being vandalized.

Native species, such as red cedar trees, have been planted.

Concern that all of the effort to preserve, rehabilitate and protect 18 acres surrounded by waters that have risen nearly a foot since the 1930s and are projected to rise significantly more in the coming decades is assuaged by the fact Rose Island is bedrock-built. No fill was used to create this Narragansett Bay oasis.

Tefft said the island, with its rocky outcrops, rocky shoreline and rocky nature, is fairly well insulated from sea-level rise and storm surge. There’s also no marina and condominiums to project.

The lighthouse and the island itself have weathered some significant storms without any major problems: the Portland Gale of 1898; the “Great New England Hurricane” of 1938; Carol, a Category 3 hurricane that hit in 1954; hurricanes Donna in 1960, Gloria in 1985, Bob in 1991 and Irene in 2011; Superstorm Sandy in 2012; and Henri last week. (The ’38 hurricane, a Category 5 hurricane, damaged the island’s boat, wiped out the boathouse and put a few holes in the circular bastion on which the lighthouse sits.)

Some of the photographs hanging on the wall and taking up space on shelves and tables tell the story of the island’s battles with an angry sea and howling winds. Photos of the lighthouse braving the 1938 hurricane were provided by the keeper’s daughter, who, according to legend, tied herself to a flagpole to document the most-violent storm ever recorded to hit Rhode Island.

Johnson, noting the west side of the island is bedrock, said it will be a while before the sea overwhelms Rose Island.

Despite its strong bones, the exposed island, like the rest of the Ocean State’s vulnerable coastline, is and will feel the effects of sea-level rise and the accumulative impacts of more frequent and intense storms. 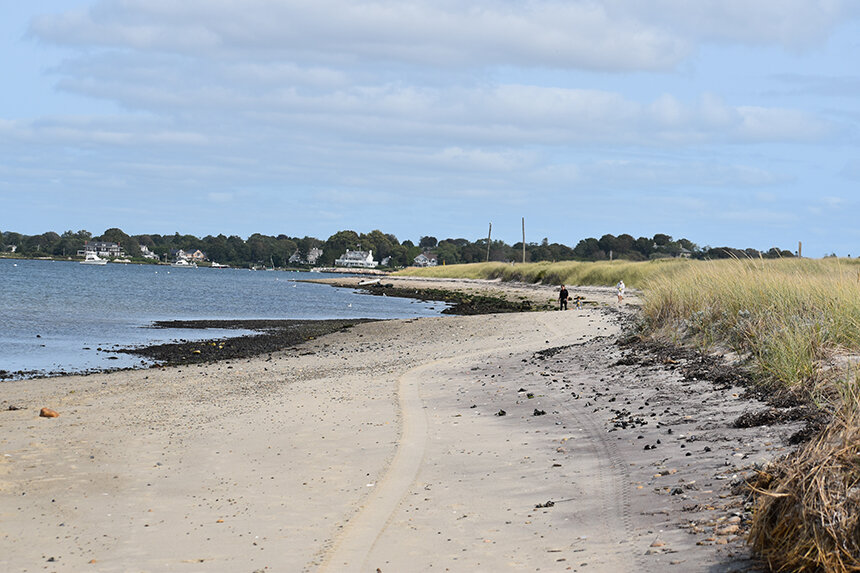 Land Use Left Undeveloped for Eight Decades, Napatree Point Rolls with the Tides 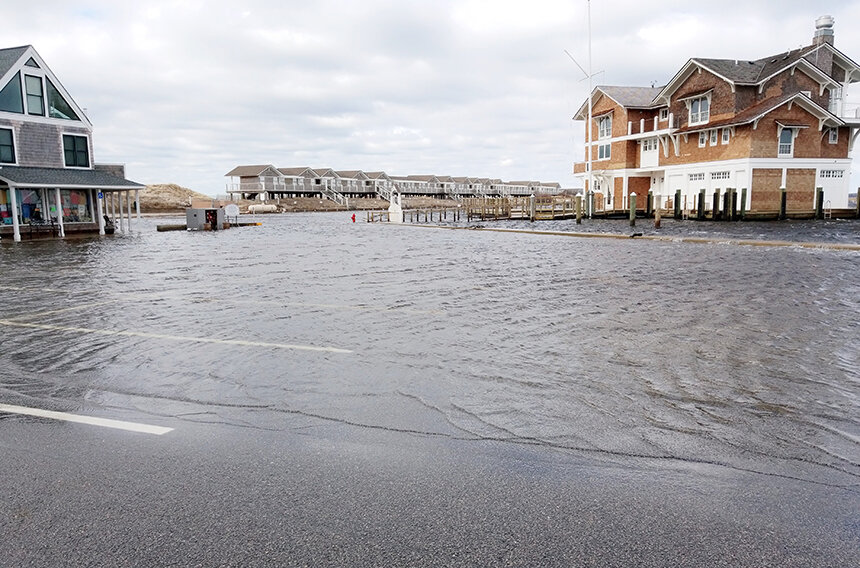 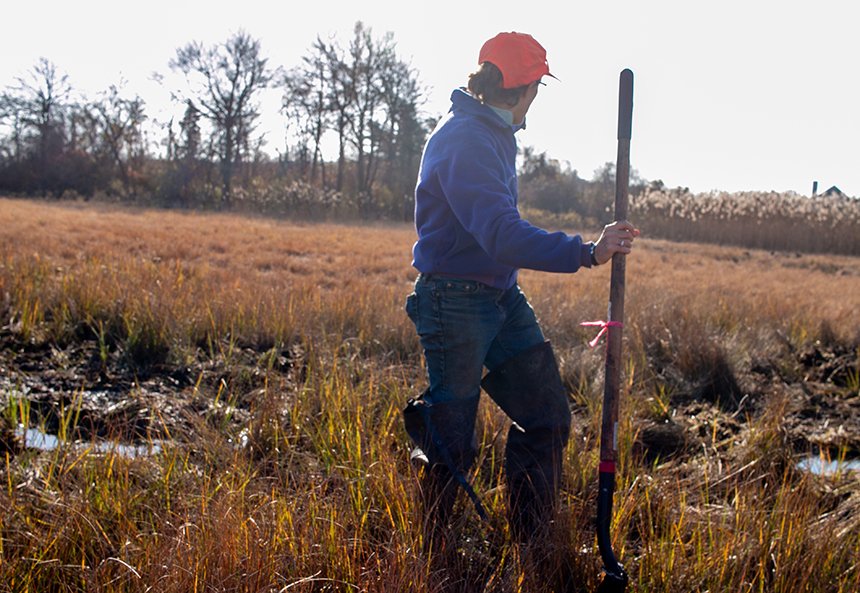