More frequent and intense weather events and major storms, such as Superstorm Sandy in 2012, are taking a toll on Block Island’s coastline. (Judy Gray)

NEW SHOREHAM, R.I. — Thousands of years ago, an island was born.

Its bones were formed by the debris left by a glacial outwash — sand, gravel and clay — and over time a lush ecosystem blanketed the land.

The Narragansett Indian Tribe called this place Manisses, which means “little island of Manitou.” Manitou is the fundamental life force found in all things, and the island was rich with it. As island residents, the Indigenous people hunted, found fish and shellfish in ample supply and grew squash, corn and beans in the fertile soil.

Over time, the Narragansetts were forced out as White settlers made their way over from the mainland, and Block Island, a windswept granola bar of geological deposits, began its Colonial history.

Block Island is a resilient stretch of earth, one that has survived hurricanes, attempted land grabs and, according to legend, the occasional pirate.

Today, the island’s residents face a different challenge to their beloved spit of land: it’s slowly crumbling into the sea. A group of four dedicated residents, and the mainland scientist who guides them, have been tracking the island’s changes for eight years in the hopes of discerning its future.

Keeping an eye on things
It’s late October of last year and rain slashed down as the Block Island Ferry backed out of its slip at Point Judith and slowly chugged the 15 or so miles to Old Harbor on New Shoreham. I drove my car off the boat and headed to the parking lot off Corn Neck Road where Judy Gray, Jules Craynock, Nigel Grindley and Catherine Joyce were waiting for me.

“You made it!” said Gray, as we gathered, masked, under the shelter of her opened car trunk, which houses a laptop and a large black-and-white measuring stick.

The four retired scientists and friends have been working with Bryan Oakley, an associate professor of environmental earth science at Eastern Connecticut State University, taking measurements of various beaches since 2013. Oakley became interested in collecting shoreline measurements for Block Island after realizing there weren’t any datasets for the island.

“[I]n talking to Chris Littlefield of The Nature Conservancy out on Block Island, he mentioned he knew a number of retired scientists out there that like to get involved in projects,” Oakley recalled, “so things snowballed from there.”

“We go to these sites and we used to do it monthly, now we do it quarterly … we measure the relative height from a base marker that we know the height of,” Gray said. “And we literally, just on a piece of paper, you can draw the line of the profile of the beach.”

The scientists use the Emery Method of beach profiling — developed by marine geologist K. O. Emery. It involves using two survey rods that are marked every 2 centimeters. They’re separated by a string or survey tape that is 2 meters long.

The readings are sent to Oakley and “he does the actual interpretation,” Gray said.

But beyond tracking changes to Block Island’s beaches, Gray and company, as island residents, have also born witness to various environmental changes.

Gray pulled up photos of the devastation that Superstorm Sandy wrought nine years ago on the stretch of beach across Corn Neck Road, one of the many areas that she and her partner, Craynock, and their friends and fellow couple Grindley and Joyce monitor.

On this rainy day, the tail end of Block Island State Beach is a narrow stretch of sand with large boulders that stack up leading to a small dune and, eventually, the road.

“So, where we are standing now, that revetment was added after Sandy,” said Gray, pointing to the tumble of boulders along the beach’s edge. “So this is a picture, this is what this road looked like after Sandy.”

The photo on her laptop showed a flooded, crumbled section of road and a stone marker that was displaced from its location on the edge of the parking lot.

“You can see the marker just fell off, it was completely undermined and was riding the rocks down with the surf, because the surf was up on the road,” said Gray, clicking to the next photo. “And here’s the beach right here. Someone tried to drive out that morning and that wasn’t the smartest thing they ever did.”

The next photo showed a car slumped into a hole in the asphalt. “Check it out, the road is half-gone,” she said.

While Sandy’s devastation was surprising, it was especially concerning when residents saw how Corn Neck Road, which serves as a sort of main artery to essential services on the island, was severed. The road is prone to flooding from tides, storms and sea-level rise.

This is the struggle of living on an island that is regularly buffeted by wind and waves, in an era when heavier rains are more prevalent and intense storms more frequent. It’s only going to get worse as naturally occurring and human-helped erosion continues.

Dumping ground
Gray and crew drove over to another beaten and worn section of the island that is rich with history: the New Shoreham transfer station off West Beach Road.

“When I was a little girl, this was where we came and dumped our trash, and when the wind was from the east, they would light it on fire, and that’s how they managed the trash here. It was called the island exchange,” said Gray as we trudge onto the damp beach on the west side of the dump. “In fact, my uncle used to come down here and shoot rats.”

While no rats are visible on this day, rusted pipes and chunks of twisted metal poke through the sand, as common as a seashell or smooth pebble. A seal popped its head out of the black water to observe the troop of raincoat-clad scientists walking down the beach.

“What do you guys think, how much was this beach cut back during Sandy?” Gray asked. “I think Bryan [Oakley] said it was 25 to 30 feet.”

“We mostly remember post-Sandy with all these bits of metal sticking out. It was horrendous,” Grindley said. “There were even whole radiators from the Victorian hotels. I mean, the amount of metal in there was incredible.”

Besides Superstorm Sandy, in 2012, wiping away swaths of sand, the old breakwater on the west side has also contributed to West Beach’s erosion woes.

“If you go to the far side of the breakwater, there’s the biggest beach you can imagine,” Grindley said. “It was all filled in since the breakwater was built, and it continues to grow, but its stolen all of the sand that would normally be washing onto these beaches … so this is the most rapidly eroding beach portion of the island.”

To help protect the transfer station, which today is merely a collection point for the town to haul its garbage to the state’s main landfill in Johnston, a $2 million boulder-and-earth seawall was built in 2018. Craynock said he expects the town to get a good 10 years out of it, calling it more of a Band-Aid than a cure.

“I think it will get a little bit more, but it was a very expensive temporary fix,” Gray said.

Losing ground
We pile back into our cars and navigate through town heading south toward Mohegan Bluffs, a stunning vista that displays an extreme example of natural erosion on the island.

Gray and her fellow scientists dodged puddles and small ravines that course through the clay-rich soil at the top of the bluffs.

Looking out over the top, the dramatic crumbling sides of the island are exposed.

“When I was a little girl, I thought these were eroded by the sea from underneath,” Gray said. “But, no, it’s mostly freshwater erosion from behind the cliff, seeping through and weakening the clay.”

“It’s worse along the bottom of the bluff,” Grindley said. “You’ll see these places where there are little sand deltas that have flowed down from above.”

Natural erosion here has been a problem here for years, so much so that the regal Southeast Lighthouse was in danger of crumbling into the sea and was moved 300 feet inland in 1993.

“You can really see, if you come and take a picture every year, you can see the difference from year to year,” Gray said.

So, while Block Island may be slowly crumbling into the sea that surrounds it, and while sand is swept from one section to another, perhaps that was always how it was meant to be.

But the question is, is it happening faster than it should be? Oakley is skeptical that one day soon the island will become the next Atlantis, but he does acknowledge that long-term sea-level rise and more frequent storms brought about by climate change could accelerate physical changes and leave residents in a pickle.

“Since we started in 2013, we haven’t had a storm of Sandy’s magnitude, so we don’t have a great feeling for what really big storms look like in our dataset. We can observe what happened during Sandy and we can make some inferences, but we haven’t had that kind of storm again … so it’s largely been a story of recovery.”

Back at Block Island State Beach, Gray gestured to a growing set of healthy dunes.

“These dunes got cut back quite severely in Sandy, but over the subsequent years now we’ve been profiling the build up of those dunes, and they’ve really grown,” she said. 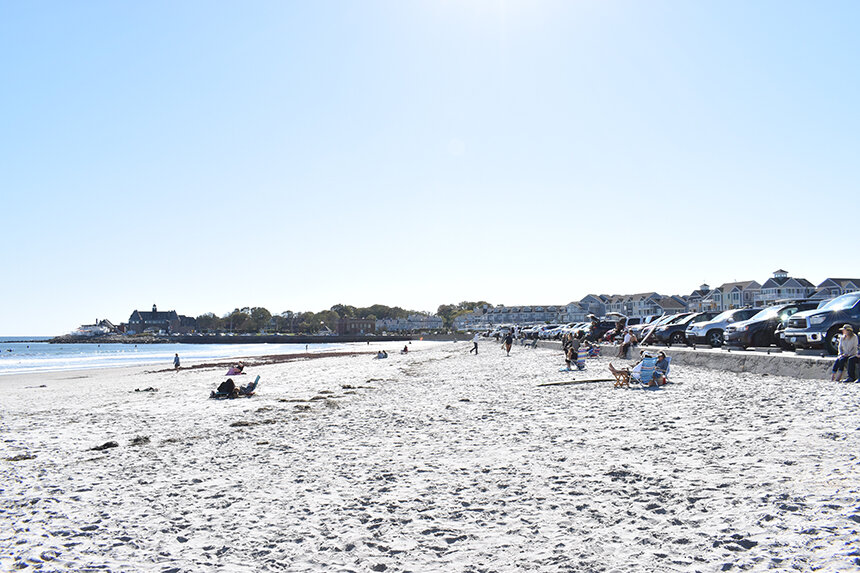 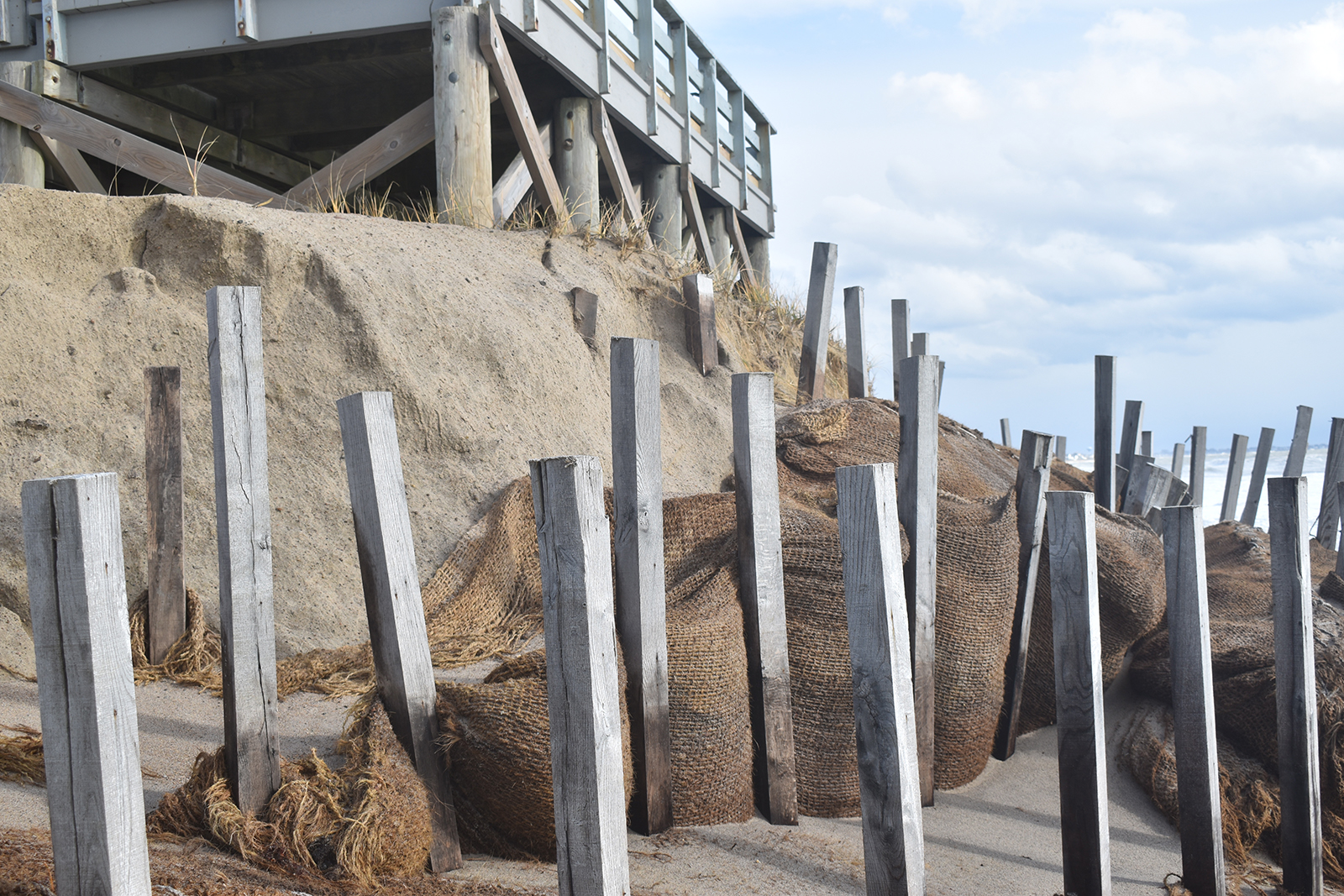 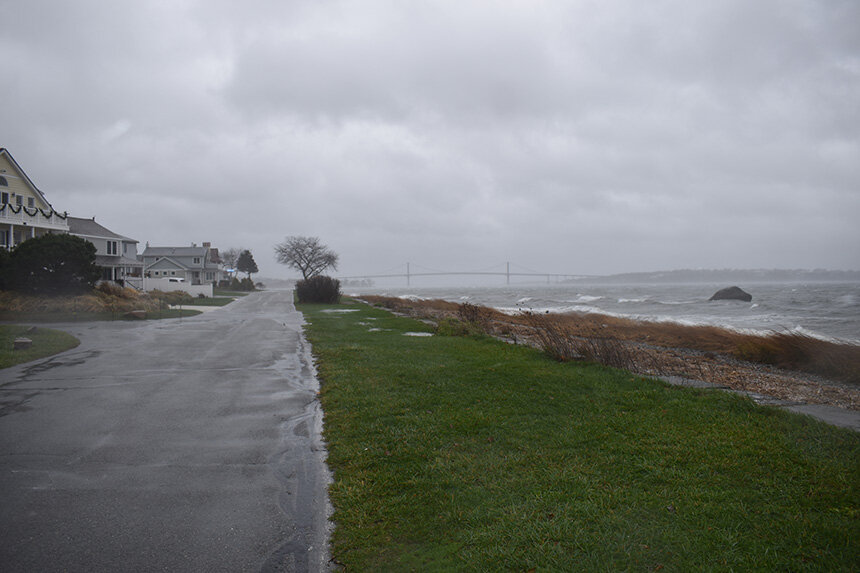